Well, its another review and chicken slices are a favourite of mine. So when I saw a new one which is made by a familiar firm, I decided to try it for lunch. Enjoy the rushed review: 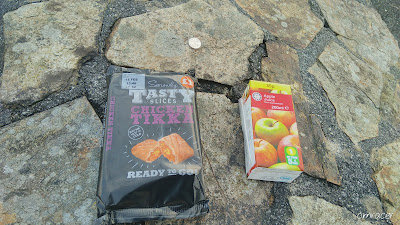 Its a nice bold design with black, white and purple to represent the bold and colour of india as usual. But hey its good and it can make it easier to spot in shelves and fridges.

Now as a slice, it looks as normal as it can be, its not too light but yet it's not burnt to a crisp either, but it wasn't in any cardboard slice which is a unique different compared with other slices but Peters have done this on the heinz slices before which is probably cutting down on the plastics that is the reason, but it is one nice cold slice to look at

Its got a nice flavour as i took a bite out of it, the chicken is chunky and the sauce is light and very much like the homepride sauce, but it does show the tastiness of it without the hassle of being too ful and having to COOK it to eat it, it also wasn't leaking out of the side like some slices do. But it was so good, especially with an apple juice after. But its one of those meals i do like.


All in all, this is something somewhat worth it for a quick meal, but its something better.

That's about it, 2 reviews done in a week, that's not bad going at all to be fair. More reviews might come soon.