So this one is actually a rare case of something that might help me in the works side of things and as much as things are going to be tough, Working online needs to be comfy and make the effort, But this was also purchased back in Lidl back in January. So that is where the cost of this comes in at £12.99, will it be good value or will it not make things easier for me to use both screens on the Desk without hurting my back or eyes. We will find out, this is ONLY  blogpost review for this.

So, we start with a vibrant front and back packaging of what this does entail. The pictures show what it's done and can hold the monitor and show a shelf for things underneath which is handy but might make it quite a bit taller if in certain chairs or seats. The Dimensions are listed as below:
The box does mention other features in the small print and shows both a Macbook and iMac Unibody as examples and books underneath, little did I know how much depth that shelf would hold. The Colour scheme of the Box is more Pale colours of Purple and White. 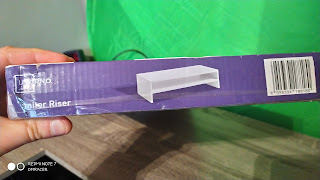 But then it comes to slicing the box and it then comes out pretty simply, as

The good thing is the holes are pre-done for it to just screw or slot it in sort of technique. Then it was time to get it built.

Now there was some confusion midway but actually, the steps started off easy with the 4 small tall screws in the small holes, then it was to get the side panels in which at first did confuse me but the holes matched up with the far ones for the tall screws and the wooden poles for the second part of it.

Eventually, it did fall into place and it was complete and that did take about 20 minutes, the picture guides from the manual were not as clear as they should be but that is how it goes for these products.
But it was then 15 minutes or so later and it was built, it was very sturdy and it was slightly tricky with the last of the big screws but it's done and is a lot bigger than it seems from the pictures but it is got the exact design for it.

Tidying up and getting it right

So getting the screens to fit was not as bad as it seem,s but it did work with both of them shown in the end, the Desk was a lot smaller than the length of the risers but Managing it to do its turn and make a mini L shape of its own.
Then it was getting the monitors to fit and the cables moved for the right places and that is more of the tricky but not part of the review, But eventually, It was shaped in a way and got it fitted and it worked and did not seem like it was much of a stretch to see from sitting down, The width of the desk means the keyboard and mouse just fitted.
Now I thought I could do better and so this is where the shelves were coming in. Turns out YES I could (might have to tweak the position) Fit my PS4 into the shelf and the front way was too less vented, the sideway well that worked better than I thought. The Prif Box was nicely on the top as well for its potential to stream. The front Shelf could work for the laptop to go there anyway
So then it was left to organise the bottom and the keyboard and mouse were just bordering outside of it, but it works for what I want it for,. But I can arrange this anyway needed so it might even be better to go upside down if it feels too high for me anyway.

To be fair, this was one of those rushed ideas and maybe it paid off and I'll have to check on it more, there are things to be checked on and it's working from what is around with me and maybe this means another chair to sort out but things in the house might be coming to an end if things are as they are. But from Lidl, this seems to be a nice way to have a better experience and what time to do it with their Home office Promo arriving towards the end of the month (If they did this in Lockdown 1 or 3 that would have REALLY come in Handy.

Well there you have it, the monitor riser which I bought a month or so ago and needed to fit on the FIRST (Actually partly first since I had to work in the morning until 1pm on the Sunday 20th) DAY OFF in FEBRUARY. This means on a personal note it can cause some of the issues I've mentioned on the other blog. But there are more reviews to come, maybe some blogpost exclusive ones like this since it's easier for me to make and a video on a panel of wood is boring for some.
See you soon
omracer