Well, this was a surprise review to appear, this comes as a unique circumstance of A broken broadband connection which was not origins fault but trigger by Vodafone. In all respect, Origin was very good and well during the delay for an engineer cabinet visit and the face I had to reset routers while naked before changing to a customer on the Friday before last aka 26th June. But by pure coincidence, I was on the way home on that Friday after work and went to Tesco and saw this archer for a £45.00 End of life clearance. So well I went for it.


Now it was time to finally get this reviewed with some time to me and well this was a surprise. Note this was a basic review for my needs and not of the full potential of the router. But you can watch the video below:

In true TP-link Fashion,  the box is the new style light blue which has been their branding for about the past 2 to 3 years. This shows the features of the box to really shine and make it clear about what the router is and whos it for. Since the Yellow Sticker on the right for VDSL and ADSL as well as some boxes have an Extra sticker for BT connections or BT infinity connections.  The top of the box shows a clear sticker of 3 Year warranty.

Then we look to the sides, which actually is more of the amount of text on there instead of real images on one of them but the other is a nice small advert of the TP-link Tether app. As well as the interface of the router or how easy it is to set up. The main thing with this brand is that most of the features are written on the packaging,

Then we have the back and the bottom, mostly with infographics about Beamforming and the plan with how things work with the router and the important features of the router as well as the behind of the router itself. The bottom has the small print and serial number and that.


We then have to open the box and the nice design of this makes it easy to take apart, like the eggshell case and the wrapped parts to make it easier.
Included in this was the

Well, his was actually very easy, just replace where I put the Previous TD-W9970  and using he same power cables, Ethernet Cables and the RJ11 cable into the router and then turn it on, it was as simple as that.
Once that was done, time to just turn it on via the button at the back, then the lights were to appear.


Then it was time to turn a PC or mac on and login to the outer, yes this can be done on smartphones but the bigger screen and I was in a bit of a small rush on this one. But it was pretty much login to the 192.168.1.l IP.

Now if you do want to see all of the menus you can use the TP-link emulator. Also, I would not recommend the TP-link tether app due to the fact it's just signing up for online accounts. But Well I went to the IP address of 192.168.1.1 on safari and then ran the quick setup and it lets me insert the details for the ISP and well after that it was pretty much connected to the internet and time to make the wifi setup the SSID. I mean that was easy to split the 5Ghz and the 2.4 GHz as well, which is vital for games to work. You can tell if the 2.4Ghz and the 5GHz wifi is on from the box itself too.

Then there were some of the settings, one which I wanted to check but was not mentioned on the box was the 3G/4G Settings and judging from the interface, I did actually see that Which if the internet goes down can tether to a whole house if needed.
So with that done, it was time to do tests to make sure this was an improvement and not a replacement.

Actually, this was a shock to have most times almost full speed from the Google speedtests on Wireless and Wired. Even from a distance, the speed was better than I expected it to be.  The connection speed was not boosted from the router so it was reasonably accurate. 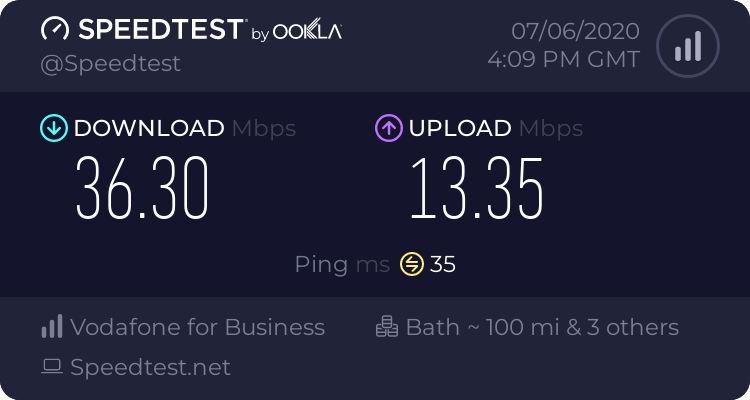 Multi connection above
Single Connection below 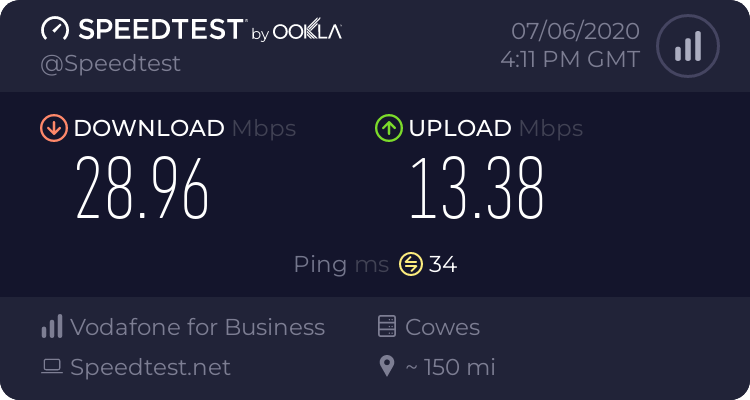 But then it was to test the wifi and actually well this was impressive. I mean before with the WD9970 I was just getting a signal near the end of the shed where I put my bike. So when I walked there, I saw a strong signal on the 2.4Ghz  but the 5Ghz did not leave the house or just outside the house signal dropped. But that is expected of 5Ghz...

But here some test using the Google Speed Test, both Indoors and the Greenhouse.


This told me that actually, the wifi is more powerful in the house and from what I've also noticed the buffering has been a slight reduction but due to the low speeds beforehand there has been no change in internet speed in general,  This is fine in the most cases I mean the upload speed is about the highest it can be according to BT Wholesale, sure for the download, I'm still 15mbps from good speed but that is probably outside wiring related.

All in all, this actually does improve signal that little bit more and gives a good speed from the router over wireless close to the original speeds from the Phone socket to the Router itself. Well, only not under load. Especially if you use to have loads of devices connected to the 2.4ghz wifi in most cases.  The good is that the same wifi SSID and password made switching an easier ride and not having to re-connect everything to it as well
As far as I can tell :

Thanks for waiting for this one to be released, work has been busy and eventually, it will have to come out as well with delays happening as things take over. But for now, see you for more videos and reviews soon. I have at least 3 more to get done for the summer.,