Well, it comes to this, the part where we get out setup sorted and install windows and play some games. Which i've been delayed in time but luckily thanks to insomnia, I had a chance to film this setup. The video for this is actually in Part 2 of the steambox build. Since it was easier for me to get it done.

Well this was relatively simple, insert the USB drive (I made sure the copy of windows 10 pro I had lying around was on the usb as GPT UEFI via rufus) and boot then install. Which it was about a half hour wait to get it installed, the SSD on a SATA III port (one of the first times i've seen this happen on my own PC) is insanely fast boot timings to gander at.

Then it was a case of tweaking some settings, activating windows and then it was time for the drivers. But the funny thing is that most of the drivers were installed from the get go, like the ethernet and the Chipset ones.

A) Installing the Drivers

Now this was a bit more complex since there was no DVD drive added in for this build. But luckily there was a normal sized internal with a IDE to USB adapter to use which got me going and those drivers installed. Now Gigabye offer Google and Norton products on the disc, which you have to UNTICK if you Don't want them, which for norton and google drive, I did (I don't use Gdrive much, mostly onedrive)


There was a reboot halfway due to the realtek audio drivers installing themselves, which is standard for the Audio Crab to do as its ritual to get nice budget audio working, especially with the yellow LED line on the motherboard for Audio signal. But once that was sorted, it was time go get the next part of the disc sorted, the Gigabyte Appware/Software.

B) Gigabyte's App Center and Intel Tuning to the Extreme

Well this bit was a longer wait from the disc to install, this was Gigabytes App Center to sort out after the Realtek reboot, which there was a specific purpose for this which was FaceWizard, which allows to change the BIOS logo, sure businesses do it on their OEM machines but for me a logo I made from a Goose Fair vlog would be ideal for it.

So I started installing the Extreme Tuning Utility first and this was more powerful than its leading you to believe, but there is a catch which this celeron processor. Overclocking will not work, since this is the problem. 223 was my Mark score on this after everything was installed. Once this was done, Face Wizard was running and I got it to change the logo, it suited the steambox incredibly well, I even had to censore the video since i was that happy with how it looked.

Part 3: Steam and Time of Testing

Bascially as steam goes, its stimple from here but it was a case of getting my software setup, like SCP DS3 for controllers and Steam, Kodi, Movie Studio etc. Which that went fine, but installing the games i had from my exteral HDD was a mess, which after various methods of copying, library remaking, I got most games to be pickup-ed but 10 o so were doing updates which made it nasty.

But lets have a look at the games I tested which were actually more than the list but I chose these since they have different generations and some different Genres.

A) Castle of Illusion

Now this was a unexpected surpise, since this game was somewhat playable on 1080p on highest settings, which was 30 to 40 FPS, but tweaking some things got me to towards the high 50 fps range. Which is a good sign since this game does have its nice charm with it. Turning Post Process off did show a smooth framerate which is a handy life hack

This is a demanding and for some people, Badly optimized but not a problem due to the early access stage of the game, but this managed to run on all high at 720o at 11 FPS, That is pretty poor but turning some of the effects off only raised this fps by 2 frames to 13-15 or so. But there was less lag compared to the laptop's SSHD, but no way smoother. As the Park expands, the FPS will drop.

Now this felt smooth considering it was at 19-20 FPS on 720p Windowed Mode with the Antisropy to the left of the slider on the Launcher. But in the recording there is some major restructuring, which means eventually people can buy this in a Humble Bundle, but unbounded was in one last year at some point.

Now this is a new game i was supposed to do a lets play of this but that might be skipped due to the iGPU performance is not as fast as I was guessing but it worked and Sonic had a slo mo feel to the walking, then again the game is a locked 60fps. But I managed to get 20 to 24 FPS on 720p without major lag with some settings changed.

This was interesting since it gave me 60FPS on 1080p. I was excited to as how this one performed. Which is did even though the res was proper, there was lag in the video recorded so it can tell there wss struggling going on.

This is a new one since I decided to get it for £10.14 the day before its £9 from a steam sale. But anyway, I decided to and since i'm temtped to start streaming that. Normal settings were about 20 FPS and went up to 47 FPS after turning all Performance or Higher on 720p.

With everything set up as a steam box, now i can catch up with the PCMR and feel like a gamer again, there are upgrades, sure but this one is pretty good for what I want it for right now, ok video rendering is a slow bit of work but it can do it nicely. There is also twitch streaming which will be fun to work on as time passes me by as well.

But for now, thanks for the wait and enjoy more posts soon

Well this is the second part of the steambox project I've been working on. The first part is HERE and the video of the build is below:


Part 1: The CPU, Motherboard and RAM.

Now this was a nice smaller design than parts I usually work with since its Atx and since skylake  is less than a year old, this was a pretty not heard of range of parts used. Except the Corsair Vengeance LPX, which is the usual good quality ram around on the market.

The nice thing with intel is that the steps are the same to install almost all of the standard range of processors, LGA1151 was no different to 775 which is good but one thing that Happened was the pins bending on the old G31m-ES2L which was me having to buy ANOTHER replacement for it. Now this  was sadly the case, but the first time was an issue with the locking mechanism not working as the second time, which of course corrected the problem and got me a steambox working. The Cooler was the stock intel one which worked very nicely and had no problems fitting on even after taking it off and on 5 times.

Then it came to the RAM, which the slot was actually quite one sided so fitting it wasn't as tricky as it should be, also DDR4 has a slight curve on the sticks from when i closely inspected it, but thats a good way to differentiate it from the other types. Eventually it was ready to be inserted to the case.


Now this is a new one for me, fitting this 700w PSU. Which is actually quite an easy process, Bascially I aligned it with the fan facting the back and the Kettle socket on the right if looking from the front, Then you can make sure the kettle extension lead inside is in the slot to a little corner near where the PSU is screwed in since it has room to then be plugged into the PSU itself. Once thats done, screw away and its safely in. But I DIDN'T until the PSU Cables, that is too early for this mistake.


B) I/O Panel and Motherboard

Now this a simple one but pressing it in and hearing a mini click and its set, since once that is in, the motherboard is slotted in and screwed down.

The motherboard is pretty easy to slot in, but making sure the holes on the board and the case align can be a bitch, but I managed to get that done and its firmly in there and then the case wiring is to take place.

Then we had the fun of the Wiring. Now since the Wiring was by the ATX 24Pin Connector, it can be hard to put the case wires into place which actually wasn't the case with this one. Since the case connectors were labeled by colour and by text just above the 24 Pin socket, it make it easier to fit them in. The USB 3.0 header was close too, but the Audio and USB 2 was a nightmare to fit it while leaving the PCI-E Slot free for when a GPU is fitted later on.

This was a inresting one since it was hard to find a spot to put it, So i managed to wraped it around the back half of the case and it had sticky adhesive on which makes things a bit easier.

This one was sounding simple but actually getting the SSD on the 2.5" front slider was tricky at first but that was before realising that i DIDN't Need to take the slimline DVD drive part of the slider off. But then that was screwed on and fitted. Then we had plenty of places to put a 3.5" HDD which was actually just above the kettle lead socket.


Now this is a tight one, since cables are thick and a vast range of connectors, wrapping and cable ties helped but personally i've read reviews of how hard this case is to be cable tied, but i managed to get all the cables away from any fans which is a lucky achievement, this case only takes a 4 PIN CPU and that is ok to get wrapped around. Also that 3.5" HDD case on top was useful to get those spare cables tidied up but then I decided to no do that just incase i need to get another HDD. 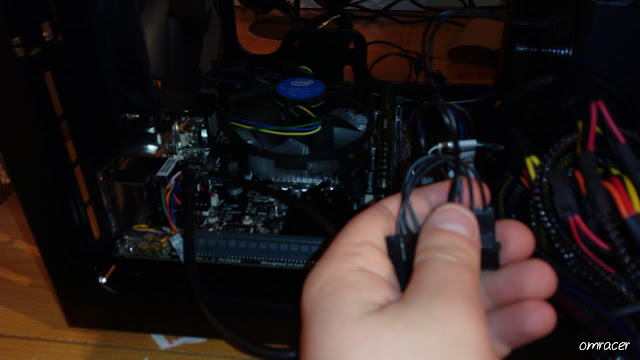 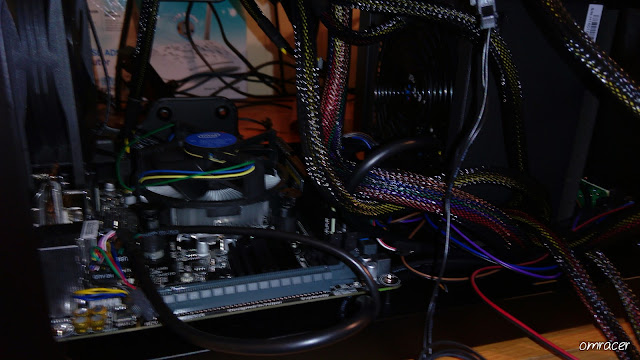 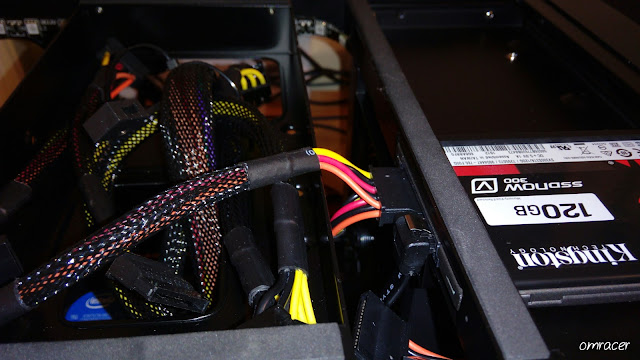 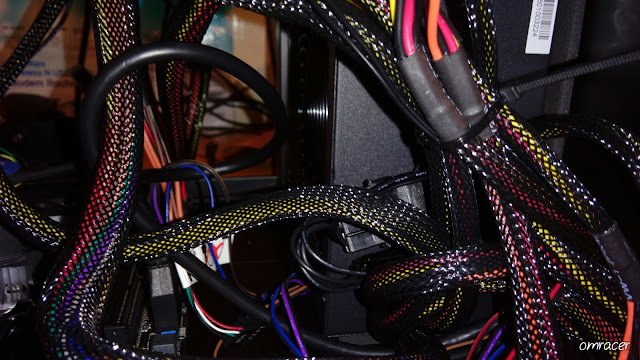 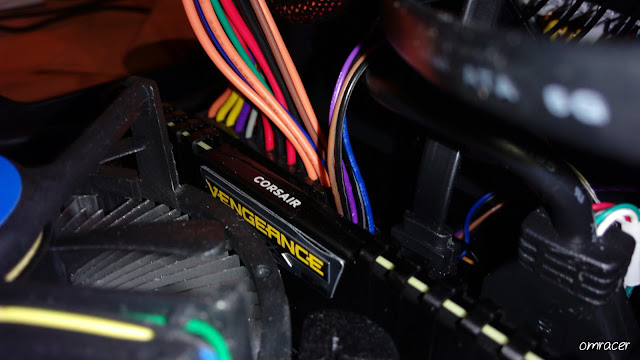 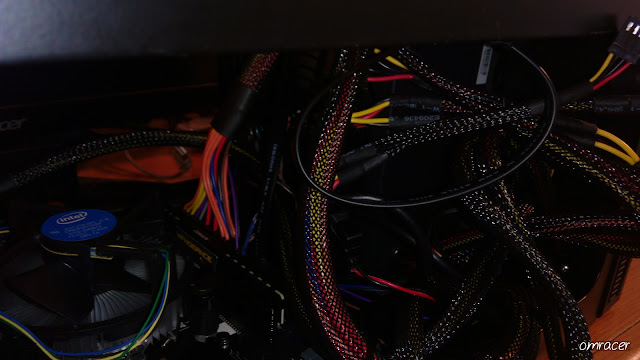 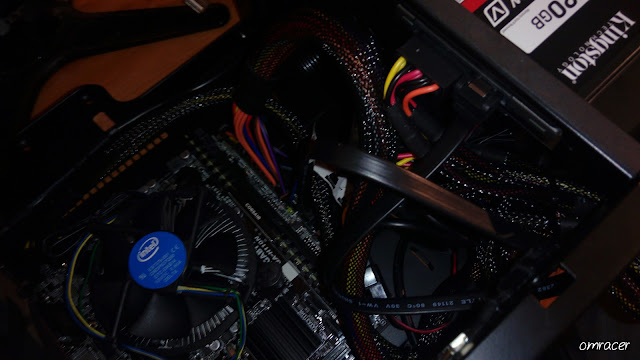 With this all done, Enjoy pics of what it looks like when its all complete minus the software side. I did stress a little building this but it would of been easier if i changed some parts like a weaker PSU and bought more strips.

Well thats this part done. The next part is to get windows installed and getting games tested.