UPDATE 26/08/2020: In all Honest, this now longer works as a capture card due to the issues with OBS Classic and no support for OBS Studio in any detail at all. Even with the Disable Audio drivers. Rating is now downgraded to 3/10.

UPDATE 28/06/17: THIS can now work if the Onboard Audio is disabled from the motherboard, this is not perfect as changing any settings or not closing OBS Classic after streaming can cause the error but also sound is working and syncing fine too.

UPDATE 22/02/2016: There is currently a major problem with the u2 and OBS when using Windows 10 build 1511 (aka the "November" Update). A "out of memory when trying to allocate -xxxxxx bytes to xxxxxx" message appears just after the audio mixing program appears and then OBS crashes. OBS Studio/MP just has a blank Screen. I've contacted velocaps about it and they haven't got a fix for it.

With the release of the HD72A which i've reviewed and done research on and since, it turns out the company behind them actually made a few USB versions, which some had more features and a price budget higher than an elgato. That was the U1 and U3 which were at the £200, but recently, there was a budget version, the U2.

If you want to buy one, the link is HERE.

The costs for this were (roughly converted in GBP)

. Which actually for me it turned out cheaper since i've bought some HD72A to sell on ebay to do some tests. A funny fact is that it took 2 weeks since the rep didn't put my address in correctly then when it arrived a day earlier than expected, the rep walked into the garden and put it in with the bike, me and my dad laughed, but more so at the haircut

The video review for this is below:

So the box is actually quite a nice concept of branding, sure there is ALOT of chinese language, it could be mandarin but i'm not sure. Which gives it a nice unique look and makes it stand out compared to the versions you might see from other suppliers (like the box of the HD72A i had, which had a intresting design but no recognition of the brand.  There was contact info as well which made it feel like a real product that could be off the shelf.

As the box opens from the front with very little hassle, we are greeted by the following:
Which that was interesting to find it had no HDMI cable, not to worry since my work has some slim HDMI cables for £8 which look and feel nice. Also the manual was really showing that it might ONLY work with the software provided, that will be a pisstake if this is the case, but we shall hope and see if its not true.

The CD was fun to see no printing on it, a interesting reason why that wasn't done, was it time or was it since the product is still very new, i'm not sure to be honest,


Well it was time to look at the actual capture box itself. Which was really light and quite clear where each of the connections were as well as a lit power button which was quite a good glow, the only downside is, it can be easy to fall out of place but since its a plastic mould to press on a actual button on the card, its not a major problem unless you have big fingers.

That was pretty much it, now it was getting to the point where it was testing time.


Time to set it up

This wasn't that complex, using the plug changer, i got it plugged into the mains, using a hdmi cable i purchased from work on my way back home, it plugged it into the vita tv and then the other hdmi into the tv, oh and the usb to the PC of course. I powered it up and the red light was flashing after it being soild. Which was odd at first, but i haven't switched the TV on.

This is also where i was nervous if it was even going to work, you know how some people feel. But i plugged it in and it did pick up the card, no luck from windows update, interesting, but since this was on 10 TP, MS could always nick the drivers from the feedback terms.

The driver info for those that want to know:

Then it was time to load the disc. Literally the sice of the disc was 32mb. And there was only one setup file on it. which was the velocap recorder software, The drivers are not on velocaps site but since there is not much of these around or mentioned, i'll add them later if requested.

Installing it was quite quick, the setup WAS in english as you see in the blurry part of the video. But after that, it installed the drivers, which interestingly enough, it only listed the audio part of the card in the "Audio, Video and Game controllers" section of device manager and the video part was in USB devices ?. But this made me worry obs wouldn't work.

Now this is where the moment of truth will or would of happened, will it work or have i bought crap. At first it was appearing with Device Connected, but the preview was turned off, then i clicked the preview button and YAY. A picture appeared on the screen, with little hassle and the sound was fine too.

Which was exciting and it was working smoothly, the only problem i noticed was there was a delay between the tv and also what was on this. Which for most shouldn't bother or maybe it happened with elgato and i don't know much on them. Anyways, enjoy pics of the various settings, most of the icons are simple to explain here. Well the camcorder means record, the camera means screenshot, the mic means mic settings, the arrows for fullscreen etc.

I've not tested recording with it but its good that it worked with no configuring.

Testing it with OBS

Now saying this didn't work with other software is luckily true and OBS did pick it up, however there was something bad with it not picking up the right resolution, This is a annoyance to ask why things don't work instantly. Eventually after manually forcing custom resolutions and all, it worked for the most part.

The capture quality was good, i think there was a black bar but i've not full tweaked OBS so i can't really say much else, maybe OBS was at 1600x900 and i was streaming 1280x720. But it was as smooth as the game which maybe its not up to 30fps after all.

But this does NOT work in OBS Studio, even though OBS classic still works providing the onboard audio is disabled. Tested on Windows 10 with Gigabyte H110N with the HD Audio disabled on the board.

Now with everything i've said and experienced considered, i think this was quite a good value, sure theres flaws which are ok for me or i can put up with but others might get stroppy about. The software it comes with is actually better than the one they provide with the HD72A by a long shot.

Well that should show you how it looks and also if you need any help, contact me via the usual. Also you DON'T have to ADD me on FACEBOOK to MESSAGE me. Just to clear it up.

This was a few months in decision making and i know there are many types of decent PC screens out there and i saw this on a special offer for £82 inc VAT and delivery from a supplier. So i purchased it last friday, before i found out heartfreezing news and when i came home on Monday 9th March it was on my bed waiting for me. The video review for this is below, this has been rush a tiny bit which i do apologise for. But this will cover any of the extras missed. The screen can be from Amazon if you wish it to BE

Well the outside is pretty basic in colour, since its just printed on brown cardboard, which is why most monitors have in relations to design, but it does show clear-ish symbols of what is features. 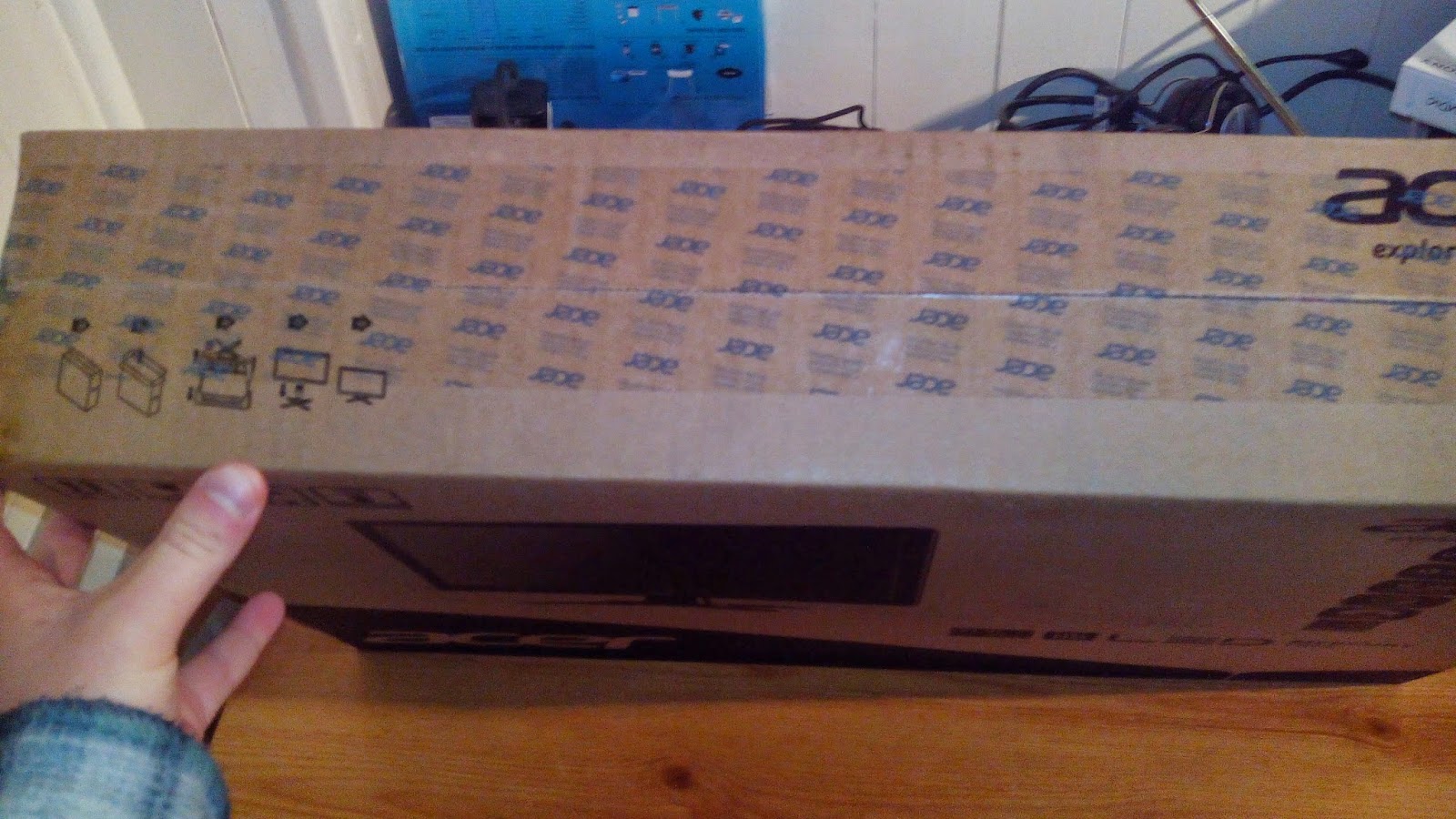 Getting into the box is simple, slice open the top and the foam covers appear which other parts of the monitor can be picked up then the screen itself can be. There was the usual pieces to get going like:

Then getting the screen out and it felt nice, not too light but not CRT heavy either, which means its got some good quality to it. Sure the connector is DVI-D, VGA and the Power jack, which is a bit week since there is no sound, luckily i have a old DAB radio which does this nicely.

This was a simple task, (although i missed a recommendation but i'll get into that soon) which  was done nicely, with all the leads needed and connected, i was ready within a few short minutes and could get it booted up :).

Then i managed to get it to turn on, it booted fine, the settings were slightly hard to get to but my fingers are not as clumsy as most others, but the settings were plentiful, with colour effects, DDI, various display profiles using the E and the menu was not intrusive which is a bonus.

I managed to get it to but when looking at it, the screen looked off, which was the fact the Resolution was NOT 1080p but actually 1600x1200 and stretched, which confused me and confounded me, even in Yosemite, it was doing the same thing, which i tried things like checking the disk for drivers and then i thought about the cable. So, using the cable provided, i changed it and it worked fine in 1080p at 60Hz. So it made everything ready to use.


Then it was just one of those nice dreams to have a beast ass PC with a huge display, i felt like that. I watched some YT subscriptions and also set up OBS and it was nice to see it beautifully.

With this in mind:

So this is a quick review which should show you what the monitor is like, if you want it, you can buy it HERE.

See you for another review soon
omracer