This is to help with a little project i've made on a budget PC and adding a GTX1050 to it. Now before we start this, the GTX 1050 is actually for the Steambox. But since i saw a deal for this N3050m-D3P for £27.54 + Delivery, I ordered that along with a Case which was £55 in total from Aria.
The GPU was £134.99 from Scan Including delivery. The video with tests except a benchmark is below:

This was a nice project, with using spare parts along with the purchases, which means which ones were used, well it was:

It was not too bad but I didn't clean the build, but this is not a main pc do i'm not going to make the effort, But I did have a problem with the original 2 sticks of ram I had, one was dead so it was 2GB, but the Ballistix worked fine. It did take a while to boot up and install due to the hard drive, If i was going to have a use for this PC or sell someone a N3050 spec, it would have an SSD. End of.

In all its glory it arrived. The Red eye with the OC and features shown and Nvidia's Mark all over. The design of the box is pretty aggressive as a GTX should feel. Features and details aplenty too.


Then we look at the card, smaller than i was worried it was going to be, with beautiful blades, a nice grill and some nice designs to go with it, it deserved a photoshoot of its own.


The Fitting and setup in the build.

Well this was a bit more complex but that was due to cables in the way, the PSU ones anyway, but it was the length of the mATX board and no PCI-E 6pin needed which is a nice touch. Then it was getting it to post, which it did first time, the fans weren't spinning on the GPU but that was a design of its own, not a fault.

Then it was the Windows drivers to install, which took ages but worked fine. Also it was still using the iGPU which i had to turn off in the BIOS to get that GTX to fully be used. Then it was afterburner to setup. That CPU Usage was a heck of a lot too, same with the HDD. 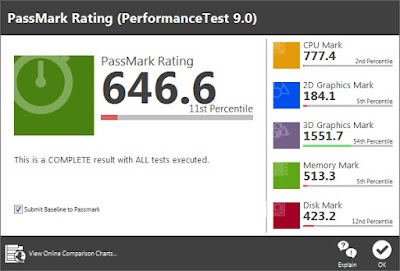 Then, I tested 3 games in the video, since 2 were too awful to even bother with, but the list is:

Below is the settings and quality shown in each game.

This combo is not an ideal one but if your on a really tight budget then it can work for £220 if you use decent RAM, PSU and a SSD. The CPU is a huge bottleneck so streaming or recording this is a no go, as the delay in audio and video showed. Also 4GB of DDR3 might not of been enough/
Also this can handle streaming if you have a 2mbps upload and use the x264 preset of ultrafast as with this PS4 capture test


Soon i'll have the 1050 really put to the test, inside that steambox.