Well this was overdue on an upgrade, 16GB on the Redmi 4 doesn't cut it and with new things to vlog, new apps to use and also people hating the quality of the food pics, it was time to get a good phone for the right price, this was actually close to get depending on the Redmi Note 8T or this but the pricing was almost the Same for the 8t as it was the Note 7. But Mi.com has the better sales compared to the Mi Store in London, so enjoy the review.  Enjoy the review below:

Well actually is a simple box with simple designs on, Orange and White with black text. I think it really brings out the simple colours. But It made it Apple-eqsue as well.

But as i opened it up, (well actually opened up much earlier to get it unlocked so I am more prepared about it) and it was nicely packed with the Pin and the Silicone back first. Which is a nice firm fit once the phone is in there, But can be easy to tear as well.


Then it was for the Phone, The metallic blue design and the nice large screen that was at work here. The weight its a heavy one so you can feel it on you, there is the Type C jack and also the headphone jack at the top. The does support audio over the type C as well. But it feels good.

Then it was the Sim Card, its a nice way to actually get it out, no teeth required. But its a Nano ONLY Sim card slot exept one of them is a slot for a microSD.


Then we have the warranty and the quick start guide. its small and no instructions on how to use android at all. But thats how they cover their legal issues.

But then we have the last part of the Charger, which is a nice simple apple-esque usb type c cable and a very slim standard usb charger but has 2A on it.

Then it was time to set it up

As i put the sim cards in then held the power button down. It turned on and then it was time to setup the PHone, since it was Unlocked bootloader wise. But MIUI has always its curious ways, but We got setup and apps installed. So it was time for the testing. I'll be honest and my stuff will NOT be copied on here during the review period. But Google account was signed in and then apps installed to test.

Now actually this was not too bad. I mean installing GPS Test and it managed to get me a fix that was reasonable accurate. It does take some time if i did Clear the A-GPS, like it would never get a fix.
Now for games like Pokemon Go (Later in Review), this would mean easier to catch pokemon for sure. For Mi Fit, we will see how it goes later.

Well now since I've been told this supports Band 20, it should mean Cuniq should now be 4G and well, The App i used told me BOTH were 4G, which is perfect, well for when Data gets cheaper for me anyway. I might be doing the £3.99 a month FP plan to get extra data.
So that means it will work for me, I can now get it to do do some wifi testing. Now i did get no signal on parts of my garden in the places i DID get signal with the redmi 4, so sadly the wifi might be weaker. But i can always upgrade my Router eventually to get some extra speed, its done me well for nearly 3 years. But it works is the main thing.
Also I did add a Grabtab on top to help with the grip of a 6.3" phone. Now This i got someone special, her mum, my mum and myself one which will help with using it and less damages i Hope.
Insert Pics here

Theres loads to mention on the Camera. But there was an annoyance that the App did not let you add a custom watermark, well since i did a reset of MIUI 11 before the review, that seems to have been FIXED. So i can now do some amazing pics and add watermarking. Here is some of the quality taken with the MI Camera App.


This custom watermarking means i don't really have to use open Camera anymore but actually the features in Open camera are quite good I will admit.

Now actually there was alot of settings to use, Now with HDR Working and also no issues recording with the Camera2API. So more resolutions given to me to use.

All in all it means I can have a good chance to carry on where i left off. It might make it hard to upload to insta and even the blog, but we shall see.

So there was a good surprise here which the charging light at the bottom of the device. Since its type C the speed is better than others, I think it took 20 minutes to go up 10% which is pretty good, I mean i started off at 76% when I setup the Phone. Battery Life i will find out soon.
But with USB type C, it means you can do extra things, such as the USB Drive and even a USB Ethernet Adapter. Now The Type C Drive is going to work for sure and will be needed for a tutorial on making a windows 10 usb drive without Windows.  But as for the Ethernet Adapter, sadly it does not affect this and it did NOT work.
But when connecting to the Steambox.
So it means I can still use this for Vlogging.

Now this actually is quite loud but only the vibrations from the right hand speaker, the quality is very loud i will admit.


Even when you put your finger over the speaker, you feel the vibration on it to get it to work. But it works fine none the less. The ringtones are nice and traditional.


Now then we have the next bit of the Performance in Games.

One good thing about MIUI in this one is that there is a Game boost features. This actually makes it more boost. Games were running smoothly.

Then see how it goes:

Well this was actually really smooth, there was a slight start of loading and delays in certain cut scenes of bits and things. The AR+ Worked fantastic and even Finely was not impressed but it was really good, i might miss this when the phones fully setup.
The GPS was pretty accurate as well. But there was no issues on the way it works.

Well these are smooth free 2 apps that work, cheese but smooth play and the sensitive touch as well. I mean the adverts are really smooth as annoying as they are.

This was actually very smooth, it was still a bit of delay with using the Dualshock 4, but it made things work out quite nicely to play CTR with, shooters and CTR might push it to its limit but it was worth it in the end. 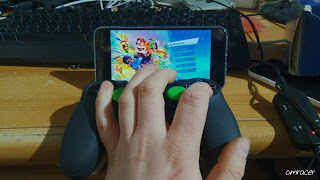 But When i played Ring Rally it did show the lag but maybe that was the Poor Wifi even with the PS4 to the bottom right of the above picture. Then again its the first time with the Drift Mechanic and also the first time with Ring Rally. In all this will handle even Fortnite really well and powerful but we can try that eventually/.

So one question is that due to the big screen, will it fit in my pocket, well actually i was surprised to say, yes it fitted in 2 pairs of jeans i have but they did have deeper pockets. They do outline it pretty clearly, but well that mostly how things go.
It can be comfortable for wearing it but Tighter jeans will cause the phone to pop out. That is for sure what i can say but we will see how long it lasts for since there is  a risk of accidents to happen. Also to check on the protection, I purchased a Grab Tab, this is a improved version of a Pop Socket.

So we finally have it, a decent phone, sure the screen is larger and that is a risk of the phone, but the power it contains, the quality of the camera and the price is making it very competitive, especially when there are some incredible Mi Offers that happen. With that in mind

And there we have it, the review of the Redmi Note 7, its a nice phone and a good concept, there will be some good times and a chance the screen will crack but I will have to be careful. But this is one of the Reviews Sorted and done
See you soon
omracer