Another review, this time this was a review my mum actually inspired me to do since she was intrested in smart bands and fitness wrists, now since i do cycle and run everywhere, this was to keep an accurateish trail of how i actually perform since mytracks is not as easy.

Only costing me £25 from Banggood. This seemed like too good to be true, but my mum got hers, and 2 weeks later, I ordered mine and my sister's (christmas present). Its a nice concept and from what my mum has with hers, it actually works nicely.

The video Review is below:

I'll admit. the size of the box is smaller than what most would expect, but its a decent modern design, white background, simple text on the front. But the back is actually nicely laid out if you can understand Traditional Chinese. Showing off the band, the product features and also the requirements to use the product, But sadly it is NOT compatible with my phone, since thats android 4.1 not 4.4.4. My mum had the same problem but flashing CM11 onto her phone did the trick.

The packaging does explain the product nicely so i can't really complain.

The contents of the box was quite small, only the cable to charge it, the band itself and a manual, which actually it ideal from the getgo. The cable is a nice apple feel to it with the magnetic attaching by the battery. It does NEED a few HOURS to charge as the video didn't show turning it on easily but, thats like any eletronic gadget. Also the band looks very light and feels light but still solid and clear when lit.

From the video, I actually reviewed and read both the English and Chinese parts, at least when filming the raw footage, it got me thinking there was only an chinese section, but its quite useful to know, such as the charging for a few hours and also how to pair and setup the notifications. Pics are only for the English Side.

Now i had to delay myself a bit for this, well the battery was flat, but charging it is a breeze but NOT with a power bank, at least the solar one i had didn't get on with it. But using a normal mains charger did and after an hour and a half, it was up to 70% ish. It did feel light on my wrist eventually, its better than a normal watch, thats for sure.

Then i connected it to the tablet, the onda's android is ideal for it. Since Vidonn do have a APK copy of it if the playstore isn't working for you. Which for me i actually just wifi transfered the apk from the playstore since i put it on my phone, which DOES NOT WORK WITH IT, which is because its android 4.2 which only 4.4 and BT 4.0 and higher work with it. I signed up a few days before so i skip the registration process for better use.


The testing of the steps

Ok so now it was testing the thing, which is actually quite easy, but one thing you can do, is track a route manually, so holding the diamond (its a button) on the band for 3 seconds and a timer appears, which lets you record that distance, Well i ended up going with my mum to Lidls by walking with Rosie. We took an hour due to me not thinking where the cooking chocolate was, But for that hour, I took 3000 steps, luckily i could logon to the website  and check the stats. Which when i got back, it was about 5,000 total, so about 3700 steps and over 300 calories burned.

So it was even counting steps as i was walking, it was pretty cool. The only downside for me so far is the fact i have to use Android on the Onda v820w to sync the data. But later on i will have to check the other part of the app, the one that lets you measure the sleeping pattern you have and how the alarm feels. But that will be for tomorrow (this was done over 2 days).

After a shave and haircut, i get to be about the 12:30 mark and then head off to sleep at 1ish, which was peacful, especially according to the chart, but i'l get to that later. Nearing the time though, I noticed my phone went off first and NOT the band, but the band had been 3 miutes out of sync compared with my phone, which means it wasn't the correct time from what devices I had with me, the buzzing was quite assertive, so it won't shock you but you will feel it in some way.
Eventually i got up and got running to work. The day went meh and after a nice end with a home visit, but running home did help boost steps.


Then after getting home and food and things, it was time to upload the data and see how i performed today. it was quite less than i thought with only 6,000 steps. But the sleep data, was interesting. 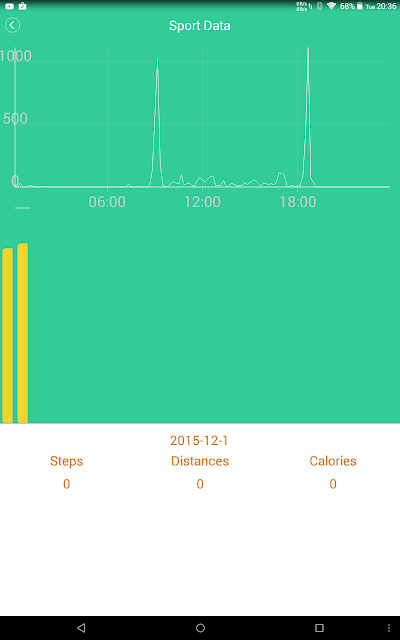 Well the battery was quite weaker but i've not fully charged it yet. I'm proud of it and i might as well review the conclusion:

Well reviews will be next year now